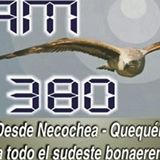 La Voz del Sudeste was heard during strong ARG-cx on February 20, 2015 in Lemmenjoki. Even though the station name was covered by QRM the end of the id “desde Necochea y Quequén” nailed the identity. The station also carried a commercial spot for “Caso Araño”. Simultaneously with this station another Argentinian surfaced back and forth with football. I expect it was AM Super Sport, Temperley (ex. 1650) but no ID was heard. An FB message confirmed my reception of LRI231.