This low power MN-station was heard in Lemmenjoki a couple of weeks ago, for a moment completely alone, without disturbances from the channels dominant KRNT Des Moines during cx towards the Rockies. JuliAnne French kindly confirmed my reception. 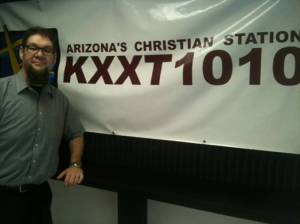 KXXT 1010 has surprisingly been heard in Northern Scandinavia during the latter part of October, 2012 periodically totally dominating over CBR Calgary! When I logged it in Lemmenjoki the station’s program director Ramon Bonilla was giving a promo mentioning his own email address. Just a few hours ago I received a nice email confirmation with two photos attached. Thank you very much indeed Ramon!

A very nice confirmation received from this rare station here in Scandinavia received in Lemmenjoki. Marcelo Pola was amazed that their signal could be received from so far away. The frequency is very interesting indeed from a Scandinavian perspective. There is actually only one “dominant” on the frequency:  ZYH714 R Globo Gama, Brasilia, DF.  The second most common, even though pretty rare, is ZYI202 R Espirito Santo, Vitória, ES. 1160 holds numerous Brazilian stations to be hunted for and with reasonable powers.

KPUR was heard last week in Lemmenjoki with a vice TOH id as “ESPN Radio 1440 AM in Amarillo, 1550 AM KZRK Canyon-Amarillo”. The station used to carry an oldies format and branded as “True Oldies”. The format was changed, however on October 22, 2012 just before we heard KPUR in Lemmenjoki with its new ESPN programming. Since KEYS Corpus Christie also carries ESPN 1440 on this frequency it is advisable to be careful not mixing them.

KBLY was surpisingly heard on 1260 last week in Lemmenjoki. The more common KTRP Weiser at the same time. Nice for me since it was the first time I have heard KBLY. A short email from Mike Nelson, NewsTalk 690 KBLI-AM and 1260 KBLY-AM rapidly confirmed my reception. Thanks Mike!

KMTA  a station I have been looking for for years. During the LEM319 expedition together with Hannu Niilekselä the cx towards North America war more or less locket to the Mountain and Pacific North West states of the US, resulting in many nice receptions from, e.g., Montana. KMTA transmits from Miles City located some 150 miles to the east of Billings MT. Mr. Terry Virag is the Manager of KYUS FM/KMTA AM. Terry is a central figure in the broadcasting scene in the state of Montana managing also over, e.g., KIKC in the neighboring city of Forsyth. During some twenty minutes during last weeks DX-pedition I was lucky to hit a jack-pot: heard KATL 770 and KMTA of Miles City, KIKC Forsyth 1250 and KYYA Billings on 730!

Last night I received an email from Terry Virag telling me “Yes…That was my voice on the station ID.  We are using an all solid state BE 10,000 watt AM transmitter that goes to 136 watts at night so the ionosphere skip is fantastic.  From one DSL..er to another…It is good hearing from you.”.

Thanks Terry for your kindness in responding!

To hear anything in Scandinavia from Brazil on AM 800 requires very selective cx and a lot of luck. On February 2, 2010 very good cx towards Brazil was recorded already during the early night hours in Lemmenjoki. Two Brazilians were battling for the channel. Of course the superior dominant MEC of Rio de Janeiro with 100 kW but also another one which turned out to be R Universidade, Santa Maria, Rio Grande do Sul! This station is the voice of Universidade Federal de Santa Maria.

A week ago I received, after some efforts, a nice email from Milton Oliveira, Programador/Webmaster confirming my reception. Milton also included acorrect QSL-card as a pdf-file. The card was signed by the stations Diretor Celso Augusto Fontoura Franzen.

KWVR was heard with rather stable signals last week in Lemmenjoki. Of the five OR-stations on 1340 KWVR has been on the most wanted list for years. During last week the (October 20-27) the cx type favored heavily stations from the Mountain states  and the Pacific North West of USA. One should be very careful not to mix this with a much more common station on 1340, namely KWOR of Worland WY!

Alyssa Werst, Operations and Sales manager of KWVR confirmed by submitted mp3-audio in a couple of hours telling me “…And yes, that’s us!  The liner (male voice) is a canned liner of ours, and the weather report is my voice.  We are located in the north eastern corner of Oregon and it’s snowing today, and have at least a 6,000 listeners in our area.  We are glad you were able to reach us.” Thanks Alyssa for you nice response!