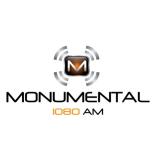 Radio Monumental transmitting from Chaco-i/Asunción  is a fairly new station beginning broadcasting on November 1, 2010. I managed to hear the station in October 2011 with a relatively stable signal but of course heavily splashed by EU-stations. The frequency 1080 is a difficult one what comes to hearing stations from Brazil, Argentina and Paraguay. By far the most common South American stations to be heard on this frequency in Scandinavia are the Venezuelans R Barcelona and R Venezuela of Maracay followed by the Colombians R Eco, Cali and R Autentica, Villavicencio.

After a couple of email reports I finally got a short confirmation of my reception of R Monumental via Facebook.

Rádio Rosario, Serafina Correa, RS was heard in Lemmenjoki in October 2010 on 1190 surprisingly fading up over R América, Buenos Aires with a pretty good signal just in time for a local break after the top of the hour and before the start of programming from Milícia da Imaculada. A nice confirmation was received via Facebook from Camilia Panassolo. The first BRA-verification on 1190  for me from one of the southern states of Brazil.

The frequency 1190 is occupied by a number of Brazilian stations all of which have the possibilities of being audible in Scandinavia during selective openings. During more northerly  cx the most common Brazilians here are CBN Natal RN, R Juazeiro BA and R Rio Vermelho GO. R América BA, however, usually completely dominates the frequency during southernly cx making it difficult  for stations from the states of, e.g., SP, RS, SC and PR to be audible.

Rádio Rosario was established in mid-December 1984 and serves the entire Serafinense region of Rio Grande do Sul and mostly carries religious programming..

KWKH in Shreveport, LA is definitely not the easiest NA catch in Scandinavia on 1130 that usually is blocked by WBBR, WDFN, KTCN WISN and CKWX depending on conditions. Common for these are that they are all News/Talk or Sport stations. In October 2011 KWKH was easily distinguished from these by it’s country music format. Unfortunately though, KWKH changed to all sports on May 31, 2012 so now it will be even more difficult to distinguish it from the rest with the same type of format.

A short Facebook message confirmed my reception report and mp3 audio. KWKH today goes under the name “1130 The Tiger”.