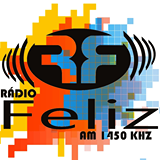 R Feliz in Santo Antônio de Pádua, RJ was suprisingly heard in Sarvsalö, in the Borgå archipelago in my friend John Hjort´s summer QTH, on May 26, 2016. That date the cx were truly interesting. Around 0040 UTC some frequencies were waking up and at around 01 UTC the band was filled with Brazilians on almost every 10 frequency between 1250 and 1600!. After analyzing the recordings it became apparent, that the cx around 01 UTC was centered around the state of Rio de Janeiro and neighboring Sâo Paulo and Minas Gerais. This is very unusual in Finland. Normally specific cx towards Brazil hits the Northern states RN, CE, PB, PE or the Southern states RS, SC and PR, the latter especially in Lapland.

May 26, 2016 gave three very uncommon RJ-stations, namely R Feliz 1450, Super R Tupi, Rio Bonito 1340 and Resende AM, Resende 1580. In the case of Feliz and Resende AM only the call letters ZYJ503 and ZYJ506, respectively, were clearly identified. A confirmation on my mp3 audio to R Feliz was received yesterday. On 1450 the most common Brazilians in Finland during the last few years have been ZYI561 Radio Paraense AM, Castanhal PA and ZYJ822 R Hulha Negra, Criciúma SC. Thanks to Henrik Klemetz and Jari Ruohomäki for confirming the station identity.