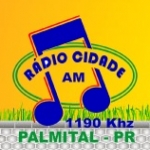 Rádio Cidade, Palmital, PR 1190 was a new Brazilian logging for me on October 25, 2012 during the LEM319 pedition. There are two Rádio Cidade on 1190 but fortunately they have different prefixes which made the identification easy. During cx towards Brazil and La Plata the king on the frequency is without doubt R América in Buenos Aires. América makes Brazilian loggings from the southern states Paraná, Santa Catarina and Rio Grande do Sul quite challenging. The mostly heard BRA on 1190 in Scandinavia is R Juazeiro in the State of Bahía followed by R Rio Vermelho in the State of Goias. There are close to 20 BRA stations listed on 1190 so it is a most interesting frequency to watch closely!

I  am pretty slow in reporting stations nowadays since I find it less interesting than listening live and to the wast amount of files that never will be scrutinized to the point. However, I some days ago sent a mp3 to Rádio Cidade and it was rapidly confirmed. More info about the station can be found at http://www.radiopalmital@bol.com.br.